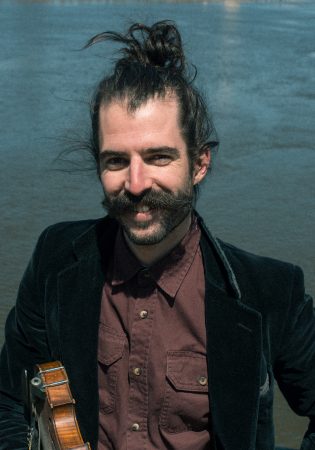 David Simard is a versatile, creative and energetic musician, evolving mainly on the Quebec traditional music scene. He plays fiddle, guitar and a whole range of other instruments. He is also a composer and an arranger.

Born in Saint-Félicien, Lac-Saint-Jean, surrounded by family and his ballroom danceteacher parents, he starts playing music at age12. Strong with this family history, and after many adventures all over Quebec, Ireland and France, this “Bleuet” decided to dedicate himself to his musical roots. His repertoire comes from collections of music albums of all sorts, musical archive documents, but largely by meeting with other musicians. To acquire his characteristic fiddle sound, he was inspired by fiddler idols such asIsidore Soucy, Louis “Pitou” Boudreault, and many others.

Although David is mostly a self-taught musician, he is a graduate of Cégep régional de Lanaudière à Joliette (class of 2010) in traditional and jazz guitar. He also recently started composing and arranging electronic music. Newly living in Montreal, he often leads different traditional music sessions in town.

Since 2011, David is a musician with Cirque Alfonse, performing in the shows Timber! and Barbu, for which he is also the music co-composer. With them, he did more than 300 shows in different countries and even had the chance to play with Dolly Parton during one of their tours in Tennessee! He is also part of the duets Les Voyageurs and Jetté-Simard, as well as other projects such as Rose Vagabond, Les Hommes-des-Bois, Jean-François Lessard, and many others.