With an official WOMEX17 selection and 16 top Canadian award nominations, MAZ’s music has proven its category-defying appeal. With their third album ID (idea), they celebrate Quebec’s traditional music while embracing modern streams in a flow of folk, jazz and electro. Their ideas are played, sung and danced, they speak to heart, body and soul without losing the mind! 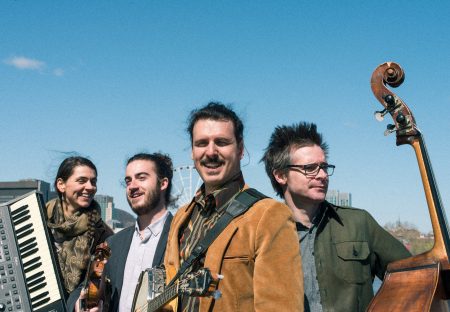 On stage, MAZ takes you on a musical journey that renews with Quebec’s heritage, where songs and instrumentals open up to new groovy perspectives. Keyboards and electric guitar meet up with fiddle, banjo, double bass and voices, over blazing Quebecois foot tapping and electro beats. This year, the band will be featured in many industry events, both at home and abroad, including WOMEX 17 in Poland.

At frist described as futuristic with Télescope (2011), JUNO nominated as best instrumental album, the band’s music reveals a modern take on Québec’s instrumental culture. With Chasse-Galerie (2013), it evolved further while reinventing one of Quebec’s most famous legends, making it resonate to the sound of here and now – and recieving two ADISQ nominations on the way.

Since its beginnings, the MAZ crew have presented their concert in over a hundred performances throughout Canada, in the US, Mexico, Ghana, and soon in Poland. With the launch of their third album, the band’s music receives regular radio play in Quebec, Canada, and the United States.

MAZ’s origins go back to February 2007. At that time, Marc Maziade was given carte blanche to create a musical project for the Festival Ste-Rose en Blanc. He put together a show called Projet Trad with Olivier Hébert, Louis-Joseph Cliché and Robin Boulianne, who shared his passion for traditional music and jazz. Over the years, Projet Trad got together for various projects (soundtracks for dance or short films, competitions and corporate contracts) with different lineups, including Lévy Bourbonnais, Jean-François Debellefeuille, Gabriel Godbout-Castonguay, Blanche Baillargeon and Philippe Leduc.

In 2011, the band toured Telescope from Carleton to Vancouver, from Petit Fribourg in St-Jean-Port-Joli to the Folk Alliance International in Memphis, before placing us in one of the strongholds of traditional Québécois music, the town of Joliette for the recording of our second album: Chasse-Galerie.

For MAZ, the legend of the Chasse-Galerie invoked the duality between sincere dreams in which we invest body and soul, and the mirages created by today’s frenetic lifestyle. Society often proposes shortcuts that can make us lose sight of what’s essential to our happiness. You need a fine sense of balance to fly a canoe. By soaring on favourable winds while avoiding the traps of appearances, it’s possible to pursue our quests without losing our roots.